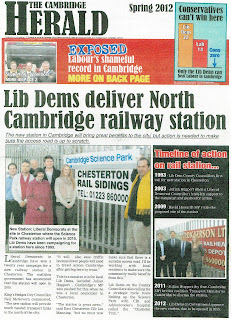 I sit down and think, right I must try not to focus on the Lib Dems for the next few weeks, people already get the idea from reading my blog that they are a deceitful bunch, but then something else comes up that is so outrageous I just can't ignore it.

Cambridgeshire Lib Dems latest deceit falls into that category.  Before I get into detail, let me ask you a question.  If you ask the postman to deliver a letter and then he actually does the job, who has done the delivery?  Exactly, the postman, the guy who has done the job.

So it can be safe to assume that when the Lib Dems claim that they have "delivered" the North Cambridge Railway Station, they have been integral to the decision-making and that they had done something more than just ask for it to happen.   Well, the truth is, they have claimed they "delivered" it, and yet have done nothing except be one of the many organisations lobbying for it to happen. They also say that "Lib Dems in Government approved the station" - which is either an absolute lie or shows the true distance that they have been from the decision-making process.  The decision to "approve" the Station was one made by the County Council's Conservative Cabinet, in consultation with the ruling Conservative Group.  It was facilitated by an agreement from Theresa Villiers, a Conservative Minister, that the Government would include any Cambridge Science Park Railway Station in future rail franchise agreements - but the approval was made by the Conservative Cabinet.  The means of funding, and the renewed vigour for the Station was a combination of work from County Council officers based on a vision from Nick Clarke, the Conservative Leader of the Council and challenge from the Cabinet, including Ian Bates, the Conservative Lead on the matter.  Absolutely no Lib Dems have been involved in delivering this project, absolutely none.

Just to make this point there are a few questions that need to be asked:

1.  Would this project have happened without the Lib Dems?   The answer is absolutely yes.   The original scoping for the Station was done by the previous administration - also Conservative and the new vigour and emphasis came from the Conservative Leader of the Council.

2.  Could this project have happened without the support of the Conservative administration.  The answer quite clearly from what is above, is that it would not.

Interestingly,in a debate on Twitter over this Lib Dem lie, not one of the three that has engaged has challenged my answers to these questions.  Instead they comment about the fact that I have once again got somewhat irate about Lib Dem behaviour.  I would argue that the world would be a better place if politicians spent more time challenging dishonesty rather than behaving dishonestly like the Lib Dems have in this case.
Posted by Martin Curtis at 14:45