Don't sign a petition for an elected Mayor in Fenland

There have been a few people posting on Twitter suggesting that the campaign for an elected Mayor is going to be resurrected in Fenland.   I am writing to urge you not to support this campaign.  A referendum will be kicked off following submission of a petition signed by 5% of the electorate of Fenland.   So, the first thing people will do is organise such a petition.  Please don't sign it.

Last time, the cost of the referendum equated to more than a 1% increase in Council Tax and it was rejected overwhelmingly (17,296 against, 5509 for).  There is no evidence whatsoever to suggest that the result would be any different (there is a good reason for that - an elected Mayor for Fenland makes absolutely no sense).

The people organising this petition seem to be people who were rejected by the electorate in the Fenland elections in May.  Apparently, they don't like the result and the fact that it gave the Conservatives the right to elect a Leader for Fenland - despite the fact that we have 34 out of 40 Councillors.  Don't let them waste your money on a campaign that makes little sense and has little chance of success.
Posted by Martin Curtis at 14:21 No comments:

The news that Tony Blair is, apparently, going to get a hard time from the Chilcott inquiry because of his conduct  over Iraq comes as no surprise to me.

If Chilcott is going to have the courage to do this, I absolutely welcome it.  I have said time and again that I believe Blair lied to us in order to justify a war, something that is totally unacceptable conduct from a Prime Minister.   Being held up as the liar he was will be a fitting legacy.
Posted by Martin Curtis at 04:21 No comments:

Thought I would link to a couple of posts from our local MP Steve Barclay's blog.   Both involve some of his activities in Whittlesey.

The first is his visit and commitment to Whittlesea railway station.   I totally applaud and support his ambitions here, as I suspect do most of the people in Whittlesey.

The second is the opening of the Enhanced Provision Centre at Sir Harry Smith.  The work going on to support some of our more difficult students in Whittlesey is excellent and it is good to see Steve recognising this (and indeed Cllr Kay Mayor).
Posted by Martin Curtis at 09:17 No comments: 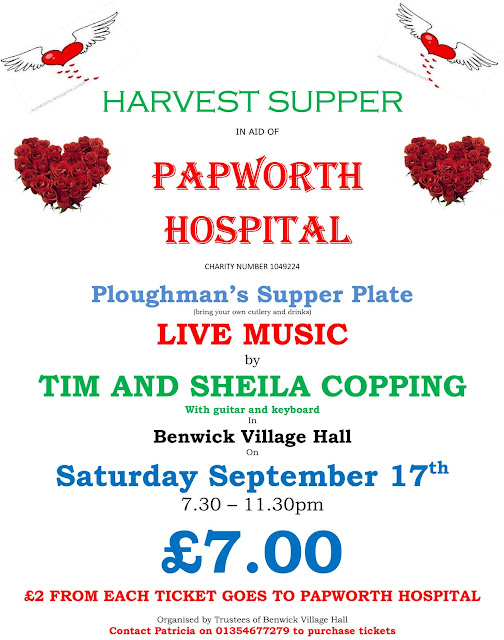 Posted by Martin Curtis at 05:51 No comments:

This is a very complex situation, two supermarkets would surely not be sustainable, therefore it almost seems a choice of one or the other, it is also true that either of the proposals have potential serious implications, mostly the impact on the A605 and the Town Centre.

It is also true that there is huge demand for a supermarket amongst residents - something that also cannot be ignored.

I received a PDF from Whiteacres about their scheme which can be found here.  Whilst it does not cover the most important issues sufficiently, it does provide some useful information (the important detail should be included with the application).

I would appreciate any feedback and thoughts you might have.
Posted by Martin Curtis at 10:23 No comments:

Who is the culprit?

The leaked email highlighting Andrew Lansley's concerns about Public Sector pensions is interesting. From what I can see it can only have been leaked by someone wanting to do harm to him and, as such, there is absolutely no public interest in its publication.  In fact, if you read the contents, it is quite clear that he was fulfilling his role as Health Secretary in writing it - but also keeping his concerns private, as one would expect of a Minister.

When leaks like this happen, we as members of the public need to focus more on who is leaking rather than on the content.

If it was a genuine public interest story - such as the exposure of wrongdoing, it would be a different story, but this is not.
Posted by Martin Curtis at 01:40 No comments:

Earlier this week I got back from a trip to a hard rock festival called metalcamp in Slovenia.  Of course, I had a great time, but it was also somewhat surreal.  The festival describes itself as "Hell over Paradise".  I am not sure the Hell bit is appropriate, but you can see why they use the word paradise.

The idea of waking up in the morning, strolling to the nearby river, swimming, washing and relaxing whilst watching the eagles soar above the valley is not something normally associated with a festival.  Of course there was always the pleasure of a few beers and excellent music in the evenings and afternoons just to bring a bit of normality to proceedings.  I have been to many festivals, but this is the only one where I could honestly say that I would have willingly spent the entry fee just to camp there at any other time of the year.  Slovenia is a country with a very proud history and it is great to see the country using that, and its magnificent alpine environment to drive it forwards.

So why have I written this article in what is largely a political blog.  Well, it is also pretty clear that Slovenia is receiving a large amount of EU money.  Whilst expanding the EU outwards has created huge immigration issues, given the history of the Balkan states, moving closer towards them and helping them move forwards to prevent a repeat of what was seen a few decades ago has to be a good thing.  I say that as a Eurosceptic and  would add that I am sure there are probably more efficient, more cost effective ways of achieving the same objective without the monolithic monstrosity that is the EU, but at least in Slovenia you can see some benefit.

I also learned that the worst white knuckle rides are not found in theme parks, but in camper vans on winding roads in Alpine mountains.
Posted by Martin Curtis at 04:35 No comments:

I returned from my holiday to Slovenia to read the sad news of the passing of Councillor Roger Green, Town and District Councillor in Wisbech.

I worked with Roger for many years whilst I was Chairman of Planning and he was vice-Chairman.  Roger was a man who spoke authoritatively and passionately about Wisbech and Fenland and was extremely well respected because of that.  His passing will leave a big gap in Fenland that will be tough to fill.

My sympathies go out to his family.
Posted by Martin Curtis at 05:13 No comments:

It was announced today that my fellow Fenland County Councillor Steve Count has been appointed to the Cabinet at the County Council to take on the Resources and Performance portfolio.

I am really pleased for Steve, he has proven to be a a real asset to the County Council since his election and his promotion is well earned.  I am really looking forward to working with him on the Cabinet.

P.S. Please give me credit for not using a "Count on Steve" headline - trust me I was tempted.
Posted by Martin Curtis at 13:49 No comments:

Yesterday I had the privilege of attending the launch of Kick Ash at Sir Harry Smith Community College.  Kick Ash is a program that uses young mentors to try and prevent and reduce smoking in schools.  There is real evidence that the program is really successful in other schools.  The mentors who were involved in the launch yesterday were great - a few weeks ago they were involved in creating a radio advert, which they played yesterday with some accompanied comedy acting. You can find the advert here.

Congratulations to everyone involved.
Posted by Martin Curtis at 13:24 No comments:

Lots of focus and pressure on the News of the World and News International over the phone hacking scandal.  And quite rightly so, anyone that feels that they have the right to hack into a missing person's email simply for the sake of a news story and a few quid is nothing short of despicable.
But, it surprises me that this scandal has not moved and looked beyond News International.  Someone at a senior level needs to start asking editors and journalists across the whole of the National media whether they have been guilty of this practice or whether they know of other newspapers who may be guilty.
My suspicion is that this is a practice that goes beyond the Murdoch press.   John Elworthy, Editor of the Cambs Times did a great interview about this on BBC Radio Cambs - the link is here - the interview is 2hrs 15mins in.
Posted by Martin Curtis at 14:18 No comments: