Last night I made a few somewhat strong responses to some comments on Twitter.  I have decided, as a result of that, to outline how planning works and my view about how the Supermarket survey I am conducting in Whittlesey North Division (the area I represent as a County Councillor) fits into the process.

The first part of this is to put the issue of predisposition and predetermination out into the ether.

Predisposition with regards to planning, means to go into a planning meeting, minded to vote one way but remaining open-minded.  This is allowable, and quite rightly so - it is virtually impossible to go into a meeting, having read the planning papers, read a few comments on-line and also having visited the site in question, without having a voice in the back of your mind that says "I'm not sure about that" or "that looks OK".

What a committee member is not allowed to do is be predetermined.  That is to go into the planning committee with your mind already made up and having decided that, whatever happens, you will only vote one way.  Being blunt, it is a daft position to put yourself in.  Planning is an evidence based process - often last minute changes are made, or evidence emerges during the planning committee - either from debate, from presentations or from questioning presenters that influences your decision.

It is also true that presenters often raise issues that cannot be taken into account by the committee and part of the role of the members is to filter those out; examples include questioning the character of an applicant, or because of a link to a party political campaign; planning decisions have to be made in accordance with local and National planning policies.

So how does this fit into the current supermarket applications in Whittlesey?  Well, I am conducting a survey because I wanted to know the views of the people of Whittlesey North Division (who I am elected to serve) about the proposed supermarkets, and I have said I will publish the results of that survey.  Of course that survey has to inform my thinking.  But although I have published some of the interim results in order to stimulate debate- there is loads of work to do on it yet- such as getting an understanding of what are and aren't planning issues out of the many things that are raised- and giving weight to those issues.  There are also still lots of unanswered questions about all of the applications that the survey will not bring out, such as; whether any of them will have an unacceptable impact on the A605; what access is best; whether any of the applications will have a disproportionate impact on the Town Centre - and our Town Centre is coming out as the biggest Whittlesey issue in the survey. I also have no idea what changes and improvements are likely to be made to the various planning applications between now and 29th August and I am still waiting to see the outcome of the report that was commissioned after the last meeting, nor am I aware of what the officer response will be.

The point of writing this is to highlight that there is still a huge amount of water to flow under the bridge between now and 29th August and that everyone on that planning committee needs to remain open minded; it is how I approach every application and it is how I am approaching the supermarkets decisions.

Please, please keep submitting the responses to my survey.  They are hugely informative and helpful.

AS I have done previously on contentious planning applications.  I will use my blog to publish the reasons and thinking behind how I vote on 29th August

I have just had it confirmed that the planning meeting to discuss the current Supermarket/Business Park applications will be held at the Manor Leisure Centre in Whittlesey at 2.30PM on Wed 29th August.

The decision was taken yesterday by the Environment Agency to invest £21m in Flood Defences for Whittlesey Washes.  The Cambs Times story about the investment is here

I want to make the point that I take absolutely no credit for this - I am just passing on some good Whittlesey news.  Our local MP Steve Barclay has fought hard for this deal, ably assisted I must say by my fellow County Councillor Ralph Butcher and also Fenland Councillor Alex Miscandlon - and they have had to be totally robust in making this case, the proposed deal was nothing like what has been achieved.
Posted by Martin Curtis at 10:33 1 comment:

Email ThisBlogThis!Share to TwitterShare to FacebookShare to Pinterest
Labels: Whiittlesey

There is a Tesco leaflet being distributed in Whittlesey at the moment.  I don't know how many people will receive it, so I was going to publish it when I got a chance - but it is probably just as easy top link to the Cambs Times article about it, which is here.

I would add the same qualifier as I have done when I linked to the Sainsbury report over transport access to Station Road, that this is one side of the argument.  In particular, there has been some dispute about the legality of removing planning permission on a site that is in a separate location to the current planning application.

I am still distributing a supermarket survey around Whittlesey North, I am getting about a 12% return rate which is perfectly acceptable.  I will summarise the findings so far over the next week or so.
Posted by Martin Curtis at 09:05 5 comments: 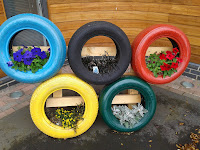 This last weekend was very much a working weekend for me. Don't feel sorry for me though, I had a great time. Here is a taster of what I was up to (and only some!!). 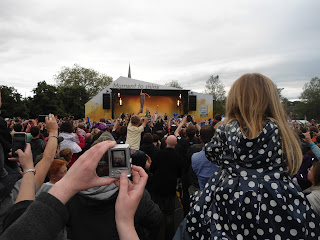 Saturday I traveled over to Parker's Piece in Cambridge to have a look at the events going on as part of the Big Weekend (which obviously included the Torch Relay).  I arrived early to make sure I got a chance to walk round the many stalls that were there before I headed over to Anglia Ruskin University for a function hosted by them to celebrate the torch relay.  I had to say a few words at the event which gave me an opportunity to express my gratitude to the staff at Shire Hall who worked to make the Torch Relay a success - as well as expressing my admiration for the torch bearers and raising the importance of creating an Olympics legacy in Cambridgeshire (for which we already have plans).

I then went back to Parker's Piece and joined the crowd to watch ex-Olympic athlete Iwan Thomas  light the Olympic cauldron to celebrate the overnight stop. It was a fantastic event which an estimated 40,000 people attended (more than expected). 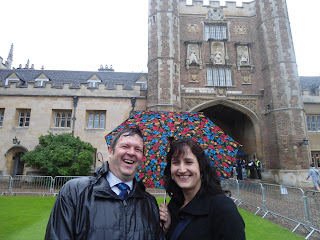 Sunday morning I had the privilege of attending the lighting of the Torch at Trinity College at the start of the day.  It meant a very early start so we could get there for 5.45, but it was well worth it, not least because I was able to take Angela, along.  She puts up with alot as the spouse of a Councillor and helps me no end, so it is nice to take her to something a bit special like this - and it was a special event, watching a recreation of the famous courtyard run that is featured in the film Chariots of Fire before the flame and the 2nd torch bearer of the day headed out to the River to be transported on a punt.


The Olympic Flame event in Cambridgeshire, including its trip through St Ives and Huntingdon, involved a huge amount of organisation from groups inside and outside the council.  So I want to publicly thank a few:  Cambridgeshire Volunteering (who will be part of one of our Olympic Legacy projects on volunteering for events), Living Sport (who also do a huge amount to promote sport around the County) and Cambridgeshire Police for making sure our events were safe and, of course, the partner Councils who worked with the County Council.


The media also deserve some thanks for their support.  I did a huge number of interviews in the weeks leading up to the Torch Relay and quite a few over last weekend too - it was great to see them so engaged and positive.  In particular, BBC Cambridgeshire deserve recognition for outstanding live broadcasting over the weekend, accurately capturing the positive atmosphere.

One of the criticisms I have had is because certain places in the County were not included in the torch route. Whilst that is shame, the decisions about the route were made by LOCOG and were not within the remit of the County Council whatsoever; the only role we played was in putting together our visions for the overnight stops. And, in support of LOCOG, designing and putting together a torch relay route was a task that was never going to please everyone - and actually overall, they have done a great job of it.

Posted by Martin Curtis at 10:05 No comments:

I was sent a document last night prepared by Vectos, who are the highways consultants who act on behalf of Sainsbury.  The document was intended to inform the review of the impact of any Supermarket on Station Road and, in effect, challenge its viability because of that.

Vectos have given me permission to publish that document on my blog for discussion.  It contains some serious issues, including highlighting potential queues of up to 400m on Saturdays at Station Road level crossing.  A word of caution - because it is a representative of Sainsbury challenging Tesco - but it seems to be based on factual evidence and, as such, is worthy of debate, which is why I have mentioned it.

The document can be accessed here.
Posted by Martin Curtis at 02:36 No comments: