I am pleased David Cameron has called for a review of the Libor scandal.  Ed Milliband's call for a public enquiry is entirely opportunistic and, in truth, the last thing we need is a process that will last for ages and will report long after the fuss and the awareness has faded from the public mind.

However, one aspect of what Ed Milliband has said does make sense.   The Libor review needs to look wider than just what went on over abuse of inter-bank lending.    The whole scandal shows a complete lack of ethics and responsibility in the banking industry.   Someone needs to be looking at how the industry has operated, investigate where other opportunities for abuse existed and find out if those opportunities were exploited.
Posted by Martin Curtis at 10:24 No comments:

What do we mean by demographics?

Some of you will have heard politicians and council officers talking about demographics, particularly in relation to older people. So, I thought I would try and explain it and give some examples.

The definition from dictionary.com is "the statistical data of a population, especially those showing average age, income, education, etc. " often this relates to current data, but in the case of older people demographics is often used as part of the evidence base and in discussions around the forecasts for our ageing population.

I was shown this table the other day which provides a perfect example of demographics in Cambridgeshire in terms of increases in the older population.


Let's be plain - this comes about largely (but not entirely) because people are living longer - that is a great thing.  But it also places a burden on social care services because we have to cope with an increasing  number of people who need support.  The challenge is how we deal with this in a world where we have less resource.  These demographics are also the reason why the need for urgent reform of Health and Social Care is being reinforced to Government.  Social Care is the biggest single item of spend in Cambridgeshire with a budget of around £188m.  This graph, known as the Barnet Graph of Doom, shows how by 2030 Barnet could have no money to spend on anything other than children and adults - so no highways, libraries or anything else!

I would challenge this slightly.  I believe there are ways we can get more efficient - for instance by making sure we are smarter with how we use technology to support vulnerable older people, and by being more preventative - for example by reducing isolation which has a huge impact on the health of older people (which is why our recently proposed Community Navigator scheme is important).

There are also bigger picture issues like better integration of health and social care to make it more seamless - which I think offers cost and service benefits (health care is provided via the NHS to provide support at home such as Occupational Therapy whereas Social Care provides basic services such as cleaning and is supported by the County Council and is sometimes charged for).

Interestingly, as I have been writing this I have been pointed to this interesting article about Health and Social Care, which explains some of the issues Nationally.
Posted by Martin Curtis at 04:47 No comments: 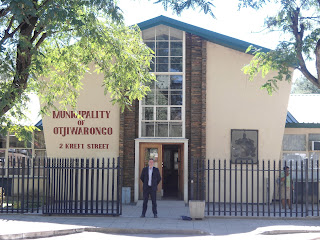 Last week I had the privilege of taking part in a peer review project in Otjiwarongo, Namibia.

Peer review is a process that is now well embedded within UK local government, it is built on the idea of officers and councillors visiting local authorities and holding a mirror up to them based on a model of an ideal local council; reviewing the way they work and offering them support and advice about how they might improve.  With the element of inspection and audit taken out, it becomes a friendly, honest process that offers genuine options for improvement. 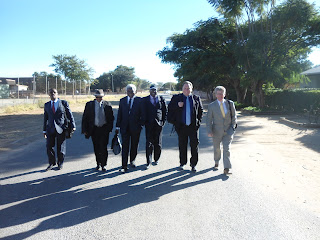 United Cities and Local Governments of Africa (UCLGA) have commissioned the LGA, via UK Government, to pilot our model of peer review in five African countries with the financial support of the government of Luxembourg.  For this first review we had a UK team which included myself as a Councillor, a Chief Executive of a local authority and an LGA review manager and were joined by the Secretary General of UCLGA, the Chief Executive of Dakar in Senegal and, for part of the time, by a Councillor from Burundi who had to withdraw after a short time because of a last minute request from his President to attend a meeting in his own Country. 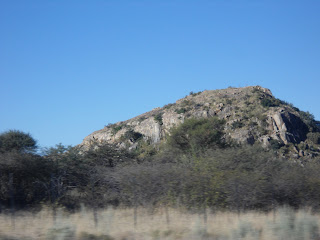 The aim was to carry out a peer review to help Otjiwarongo, but also to mentor the African peers so that they developed their own understanding and knowledge of peer review and take more control as the week went on.

I can’t comment on the specific recommendations that came out of our visit; it is for the Municipality of Otjiwarongo to decide how to disseminate our findings, but I do believe the trip was a big success.  It was also enlightening, emotional and a great learning experience. 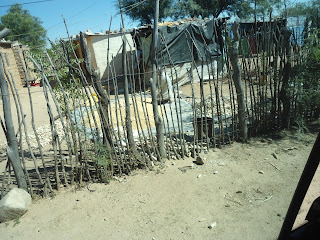 Namibia is a beautiful country; it was really surreal driving through the countryside marvelling at the mile after mile of scrubland, spotting warthogs and baboons on the route.  The emotional part was seeing the poverty in parts of Otjiwarongo and the work being done to overcome it, as well as children laughing and smiling their way through life despite their circumstances.  I should stress that  although the level of poverty is clear, we heard time and again that Otjiwarongo was managing this in better ways than many other areas – and no-one was in denial about the issue, nor was anyone exploring and looking for reasons not to deal with it. 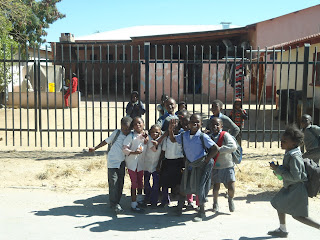 This was one of my learning points.  All too often in the UK, because our deprivation and poverty is not as obvious or at the same level as I saw in Africa, whether to invest and deal with it often becomes something of a political football, and that in itself hampers our ability to deal with it.  What I saw on the peer review was a team of Councillors and Officers of many backgrounds and differing political ideologies absolutely committed to solving the problems of the most vulnerable in their society.  If we could reach that sort of consensus in the UK, even in the current financial climate, we have sufficient resource to make a real difference.  I hope we gave Otjiwarongo enough of a sense of how they could move their issues forwards in this respect, and if we played only a small part in doing so, the trip will have been worthwhile. 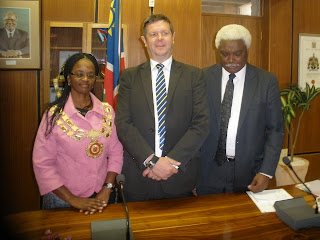 Another part of the learning process for me was working with African Peers; the Secretary General was a man of great wisdom, this and his ability to translate our work so that it was applicable to African culture was a huge part of the learning process.  Working with the Chief Executive of Dakar showed me that Africa has a calibre of Officers that would be more than capable of fulfilling the same roles here in the UK.  I also believe the commitment of the Councillors in Otjiwarongo was something to be admired.

Something else that hit home to me was the profile local government takes in Namibia.  Time and again we saw local government feature in the National news, indeed our arrival was headline news on their breakfast show’s 7 o’clock broadcast.  Whilst scale is important here – Namibia has a population of less than two and a half million – local government only seems to get a mention Nationally in England if it is a real bad news story (such as the death of a child) and that is despite the numerous attempts by local authorities to be innovative and original; the good work of local government should be better recognised in our National media. 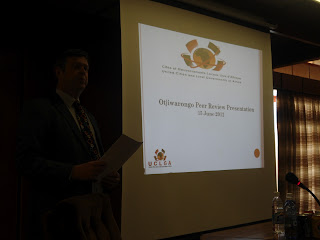 The principle of giving people a hand up rather than a hand out has long been one that Conservatives have understood, the Africa Peer Review project is about exactly that; success will ensure that local government in Namibia plays a greater role in moving the country forwards and will see a growth in peer review that will help improvement across the continent.  I am proud to have been part of a project that has such positive ambitions.

On a lighter note, as an Arsenal fan, I was delighted to discover that Otjiwarongo's football team are known as "The Mighty Gunners" - so whilst I was there I was able to buy myself a shirt!
Posted by Martin Curtis at 14:03 No comments: