I am sure a debate is likely to rage over the next few days about the County Council's proposal to increase council tax by 2.95% this year - including some who consider that a Council is not properly Conservative if they choose not to accept central Government's one-off payment of 2.5% this year if they choose to freeze council tax (known as the Pickles promise).

Last year we did choose to freeze council tax and accept Eric Pickles' offer - because the funding was for 2.5% each year over a period of four years.  This year it was a one-off offer.  That makes a difference because any council tax increase this year carries forward into next (in simple terms if you add 2.5% onto a base of £100 it becomes £102.50 - and that figure carries over to next year and any increase is added on to £102.50 and not the original £200).  In fact, the cumulative impact of not having that 2.5% on our council tax over ten years amounts to some £30m.  The other option would, of course, be to take the Pickles' money and make a bigger increase next year - which would trigger a local referendum.   There are two issues here that cause problems:
That last point is an important one, it is not that anyone is scared of listening to local people, rather that we have already consulted as part of our consideration for the current budget proposals.  That (statistically valid) consultation showed that there was appetite around the County for a small council tax rise - provided that the money was spent on residents' priorities; we have done this.  As an example by investing more in Adult Social Care in order to slow down the reductions and allow us to make the long term savings we need in a much more measured and joined up way, and by investing an extra £90m in roads (which means roads, pavements and cycle paths).  Both of these areas were shown to be priorities in our consultation. 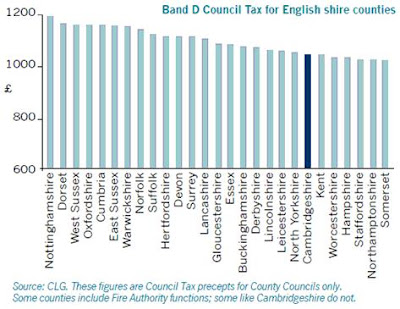 One other very important factor here is that Cambridgeshire is not and never has been a wasteful and high taxing council.  We have a reputation for sound financial management and as this graph shows, we are the seventh lowest taxing shire county in England.

This highlights yet another flaw with the Pickles' promise; we faced years of a Labour Government diverting funding to its own local councils to the detriment of Cambridgeshire.  We, as a County, also suffered much lower grant increases than our neighbouring counties year on year, yet every authority, however efficient, has an increase of 2.5%.  It is much easier to take 2.5% off your base and take the Pickles promise if you are a council that has been wasteful and bloated in the past, Cambridgeshire never has been.

That does not mean we have been complacent.  We continue to eradicate waste and find better ways of working.  The cost of our senior officer team has reduced, and we have already identified other management costs that can be taken next year.

One other argument that has been used is that we should be working closer with other councils in order to reduce overheads.  We have done this by combining many of our back office functions (legal and HR services for example) with Northamptonshire through creating an organisation called LGSS.  This is already making savings and we are looking to make more by involving other councils.

Before I come to a conclusion on this I want to cover one more issue.  I am sure the naysayers will point at the review of members allowances as an example of us being wasteful.  I, and others, keep making the point that this review is something we are legally required to do.  It is a poor system and, as a Council, we have asked Government to change it - but as things stand now we have to do it (and actually the sums involved in member allowances are a tiny part of our overall budget). It is wrong for MPs to recognise the flaws in voting on their own remuneration and then to have a system that makes councillors vote on theirs.

I have a great deal of time for much of what Eric Pickles and the DCLG are doing. Their ideas on housing are very challenging but are headed in the right direction, many of the planning reforms are much needed and the localism agenda is a breath of fresh air.  Indeed, on balance, last year's Pickles' promise was right.  But this year's proposal of one-off funding is flawed and the suggestion that it is both  immoral and not Conservative to take a local decision on council tax, based on local circumstances is also flawed.
Posted by Martin Curtis at 13:00 4 comments:

Sponsor us for the Gold Challenge

I am currently training with Angela (my wife) to take part in the Edinburgh Marathon.  As part of our training we are raising money for a great charity called Get Kids Going which provides specialist wheelchairs for disabled youngster to enable them to get involved in sport.  We are doing this by taking part in the Gold Challenge.  Along with our son Adam we are attempting to run, walk and cycle 2012km as a team in the period up to the start of the Olympics.

This is quite a task, which involves constant effort, but we are doing very well at the moment. It would be appreciated if you would consider sponsoring us.
Posted by Martin Curtis at 07:54 No comments: 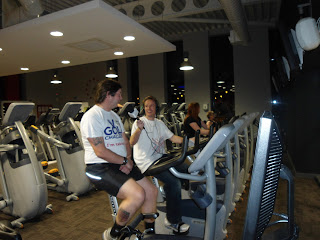 I have taken part in two radio interviews with the Peterborough edition of the BBC Radio Cambridgeshire Breakfast Show over the last two days.  I quite enjoy doing them; they are a good test and a good way of getting a message across.

Yesterday's interview was about the Joint Commissioning Strategy for Older People's Mental Health; a joint document between us and the NHS which was approved by the County Council's Cabinet on Tuesday.  The interview was quite philosophical and moved into some of the wider aspects of Adult Social Care.  I am glad it was covered by the BBC, this is a serious issue with the number of over 65s in Cambridgeshire expected to increase by 37% over the next ten years.  Whilst the fact that people are living longer is a great thing, an older population means more pressure on the services we provide - something that is made even more difficult given the tough financial times we are facing; so the only way forward is change.  The aim of the Mental Health Strategy is to provide a basis for that change, as an example emphasising the need for more comprehensive training so that there is a much better understanding of the early signs of illnesses such as dementia and then doing more to delay and prevent the symptoms getting worse.  The strategy requires much more joined up thinking between us, the organisations we contract to provide care and with the health sector - the latter is being helped immeasurably by the Government's health reforms.  Pretty much all of what we are saying about mental health is true of all of our services for older people - we need to be much, much more preventative; making sure people can live healthy active lives for as long as possible is the right thing to do in human terms but it is also good for the public purse

The interview today was a bit more light-hearted.  It was part of an outside broadcast from the new Cambourne Fitness and Sports Centre (which is a great facility) to promote Sport Relief.  Normally I go to an interview with a good idea of the sort of messages I want to get across - today was no different in that respect, expect that I never managed that at all - but then chatting to Jeremy Sallis whilst we were pedaling on exercise bikes was a new experience for me.  Not that I care too much, if I did just a tiny bit to help make Sport Relief a success and to get people more active, then I'm happy.

I did manage to talk about my training for the Edinburgh Marathon in May and my latest attempts to lose weight, which moved onto a short chat about trying to walk the talk in respect of managing a political portfolio that has huge health implications.  There are other things I didn't get across which I will probably blog abut in the next few weeks - such as the Olympics, Gold Challenge and the Sport Relief event I am taking part in at Sir Harry Smith Community College.
Posted by Martin Curtis at 06:00 No comments:

Today marks 200 days to go until the start of the London2012 Olympics (633 until the Paralympics).  To mark this occasion I was invited to go and visit Spearmark Ltd with Francis Maude, Cabinet Office Minister.  Spearmark are a Cambridgeshire Company based in Eaton Socon who have won a contract to provide a number of items of Olympics memorabilia (lunch boxes, water bottles, plastic plates etc.)

The visit was really useful for me, it clarified a number of messages I have heard about the potential of the Olympics to help businesses during the current tough times.  Spearmark were quite clear that winning this contract meant that 2012 gave them a platform to invest in their business and plan for future growth in a way that would not otherwise have been possible.

This is very important for Cambridgeshire because we have had 34 companies win Olympics contracts; in the East of England we are second only to Essex in terms of the number of contracts that have been won, which means that our economy will get a bigger boost than others.  That, alongside plans such as the Enterprise Zone on the old Alconbury site and superfast broadband, show that Cambridgeshire is very much looking forwards.

Finally, a thanks to Spearmark for their hospitality today.
Posted by Martin Curtis at 10:40 No comments:

I am absolutely delighted that the New Year has started with so much media comment about the need to review our Social Care system.  Articles like this from the BBC are absolutely spot on.

What is most important is that words like "urgent" are being used, and the suggestion is that proposals will be published in spring.

What none of these articles do is correctly sum up the problem, which is huge concerns from some people as they get older about how the need to fund Social Care will impact on them financially, alongside an extremely difficult financial situation in local Government at a time when our population is aging and therefore demand for social care services is increasing.

In truth the previous Government should have dealt with the issue, but instead chose to put it in the too difficult pile and tried to blame Andrew Lansley when they were exposed.  It is an area where the Coalition has not been found wanting - having commissioned for the Dilnott review, the conclusions of which I believe identify much of what is needed to move forwards.

There are other areas which do help in this area, one of which is to be more preventative in our outlook.  In particular making sure older people have networks of friends and good social circles is known to have a positive effect on life expectancy and this is an area of work I hope to move further forwards with in Cambridgeshire this year in my role as Lead Member for Adult Services.
Posted by Martin Curtis at 00:52 1 comment: