NHS Confederation gets it right

The comments by the NHS Confederation today are absolutely spot on, and I will be extremely impressed if 2012 starts with a genuine debate about how we change the NHS to make it a genuine Health system rather than the treatment system which we largely have today. This is a debate I have been having in political circles since May when my cabinet role moved to Health and Wellbeing and later Adult Services

There are huge issues involved in getting more care carried out at home - one of which is hospitals recognising that incessant growth on their part is no longer the answer.  In fact, part of their thinking needs to move towards   working out how to reduce hospital admissions by funding preventative work.  As an example, people are, of course, extremely protective and precious about the need for excellent stroke recovery in the UK, but we need to ask ourselves whether we should be more demanding about better stroke prevention services - which are more beneficial in human and financial terms.

The latter part of this is the role of the media.  They (as well as opposition politicians of whatever colour) seem to use the number of hospital beds as a prime measure of NHS funding.  Too many hospital beds is as much a sign of failure as it is of adequate funding; we need to change this.  As well as measuring how well patients recover, the media needs to focus on how well we prevent people becoming patients in the first place.

It is interesting that part of the debate today has been around the suggestion that the current NHS changes are taking up too much time and therefore are distracting from the ability to make this sort of change.  I strongly challenge this. Making Health provision revolve more around GPS has real potential to make our system much more preventative and much more people focused.  We need to be looking at how prevention and more care at home fits in with the current reform instead of using it as a reason not to listen to the wise words of the NHS Confederation.
Posted by Martin Curtis at 04:27 No comments: 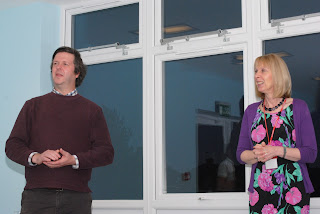 It has been quite a sad week for me, having attended four different events at Alderman Jacobs School to say farewell to Margaret Sargent who has been headteacher there for 16 years.  I have been a Governor for 15 years at AJS and for most of that time I have been Chairman, so I have seen first hand the great work Margaret has done over this period.

Alderman Jacobs School has always delivered for our children, Margaret took that to a whole new level, delivering a school for Whittlesey that has high results, high aspirations and a great team of staff.  It is easy to point to an inspection rating and say a school is outstanding, my belief is that AJS is outstanding in every sense and not just in the more limited view that OfStEd takes of education - and Margaret Sargent is the main reason for that. 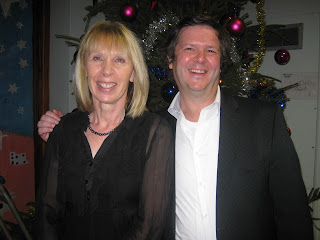 I am pleased to say that the school did a great job in saying farewell, on Monday we unveiled a plaque which names the new extension to the dining hall after Margaret (and whoever thought of "Sargent's Mess" it was a stroke of genius).  Yesterday the staff put on a special assembly for Margaret (and I shall not say what my role was in that!!).  I know Margaret enjoyed the assembly and the children absolutely loved it.

I cannot say enough how much Margaret has done for AJS and indeed for Whittlesey, and I wish her many happy travel filled days in the future.
Posted by Martin Curtis at 02:55 1 comment:

David Cameron's decision to veto the proposed changes to the EU Treaty has been widely applauded, and rightly so.   The EU has become a bureaucratic monster that eats our money and our ideology to feed its own belief that it should take over the world.  The unwillingness of some of our EU partners to compromise meant that he had little choice but to stand up for our rights and walk away.

Where it gets interesting is in how we move on from here.  There is an argument that because this has isolated Britain, David Cameron should try and build bridges.   I hope that is not where we go. Isolation is not always a bad thing - especially when the thing you are isolating yourself from is going to damage you and your future.  If bridges are to be built, the first moves have to come from the likes of Sarkozy and Merkel - who need to recognise the monster the EU has become and accept the need to reinvent based on a less predatory ideology.

If that compromise doesn't happen, I hope and believe the writing is on the wall for our membership of the EU.  And,quite probably, for the coalition Government too.  What I see as something we need to be wary about is the potential for a Labour win, or a Lib-Lab coalition after General Election 2015 - which would see Britain leaping straight back into bed with the EU and giving up yet more powers.  That means we have to act now.  David Cameron should set the EU a timetable, outlining what it needs to do and by when to repatriate powers, tidy up its act and abandon its plans to create a Europe wide state. If they fail to meet that deadline, then he should call a referendum on Britain's membership.

I believe the EU knows it needs us more than we need it.  The stupid arguments that exports would be harmed as a result of us leaving the EU have never held weight.  Businesses will deal with whoever offers them the right product at the right price. If the ludicrous sums of money we invest in the EU were there for us to use on Britain we could cut the deficit, reduce taxes and/or invest in high quality innovative manufacturing - all of which would make us more competitive, not less.  It would enable us to trade better with EU member states and, more importantly, with the rest of the world.

I have always said that my preference is that I would prefer Britain to stay in the EU, but only on the basis that it reverted to the organisation which my parents signed up for, which was about trading co-operation, and was nothing to do with a bureaucratic superstate.  My view that a referendum is needed is because I don't think the EU is capable of reinventing itself.  I suspect we are about to find out.

So, would we harm the Euro by taking this step?  To be honest, the Euro is doomed anyway - it is not fixable because it was never viable within the huge mass of cultures and ideological differences that exist across Europe.  If there is a financial hit for Britain as a consequence of the Euro collapsing, then we are going to have to take it - whether we are in the EU, in the process of leaving, or have left.  Why not be in a better financial position when it happens through not paying out huge sums of money to the EU?

The next General Election is going to be fascinating.  I don't think the Labour Party, as it currently stands, is electable - but exploitation of the tough financia s ituation might lead to a Lib-Lab coalition.  I hope not - but I can see it happening, and it would be disastrous for Britain, not least because of the EU issue.  If David Cameron deals with the EU in this Parliament that issue is sorted.  In any case it would probably see him achieve a second term as Prime Minister - but this time with an overall majority.
Posted by Martin Curtis at 06:07 No comments:

Must Farm - Putting Whittlesey on the Map 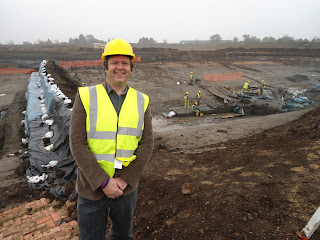 A month or so ago I was privileged to be invited along with my fellow Whittlesey County Councillor Ralph Butcher to visit the Must Farm archeological dig that is currently taking place.  Before I go into detail about the dig itself, I want to say that we should be grateful to Hanson Brick for their role in this - whilst it is true that they have legal responsibilities to allow archeology, it is also quite clear from what the archeologists were saying to us that they are going above and beyond what is required to support Cambridge Archeological Unit in doing this work. 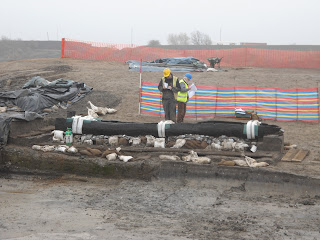 As a bit of an avid Time Team watcher, I have to say I was a bit like a kid in a sweet shop at this site - obviously helped by the fantastic stuff they have found.  But I would suggest you read some of the links at the end of this post, to read more about that - I am nowhere near expert enough, but I have been aching to blog this ever since my visit. I apologise for not doing so - but we were asked to keep it quiet for a while and I only got the go ahead last week. 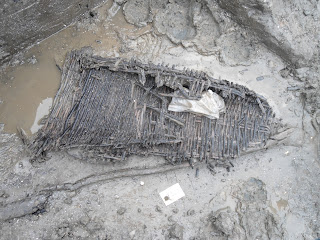 Part of the excavation is a series of 6 hollowed out log boats, some of which are so well preserved you can still see the axe marks where they were carved and also areas where repairs have been carried out.   There was also an extremely well preserved wicker eel trap.  The fact that something like that has managed to be preserved over thousands of years says a huge amount about why this site is important - and indeed it is - with the archeologists who were there repeating a number of times that the finds here are of international importance. 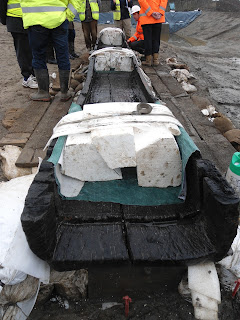 There is still alot of work to be done on this site - years worth, and these latest discoveries are certainly not the first.  I had some discussions on the day of our visit about the opportunities for Whittlesey and about how we could do something for our museum and schools - I hope to follow that up shortly, especially as I have had a discussion today with the proprietor of Whittlesey museum.

Nothing more to say - except this is not a site that is suitable to walk to - it is very, very slippy and potentially dangerous, so please, please don't try.  Meanwhile enjoy my photos and a few National and local links to media stories which say a bit more about the site. The "Shape Your Place" link includes a video which has me rambling (and I did!!) about the need to seek benefits for Whittlesey from this.

I would like to also thank Cambridge Archeological Unit for hosting us on our visit.  It was a real privilege to see this. 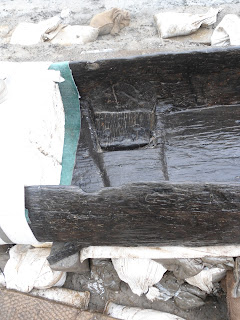 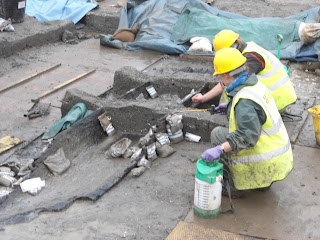 The Guardian
Posted by Martin Curtis at 03:25 No comments: