The Lib Dems contributed a mere 40 seconds to the debate at Full Council on allowances.  A debate that ended in a free vote and where an argument needed to be won.  They could have spoken as much as they liked, but adopted a group policy to stay silent, so they could make as much political capital as possible afterwards.

Someone has just reminded me that they complained back in May about being silenced.  Total hypocrites.

Be in no doubt that the current bluster is about votes not principle.
Posted by Martin Curtis at 11:38 No comments:

Today's Cabinet Meeting was definitely one of the better ones.  We approved two excellent papers to do with preventative work with vulnerable children and families, we agreed an extension to the Babraham Park and Ride.  I personally dealt with some very helpful but challenging comment from the Leader of the Labour Group, Tariq Sadiq about Adult Social Care overspending and reform, giving my initial views about the direction we need to take.

The contrast between the Labour Group Leader being active in the meeting and making some helpful, challenging comment and the Leader of the Lib Dem group who had decided to say nothing and actually sat at the back of the room appearing totally uninterested and playing with his laptop was pretty stark.
Posted by Martin Curtis at 07:44 No comments:

Politics in the Pub - 31st October Letter B

I have promised to try to do more about the boundary commission report.  Well here is news about my first politics in the pub event in Whittlesey, next Monday at 19.30 in the Letter B: 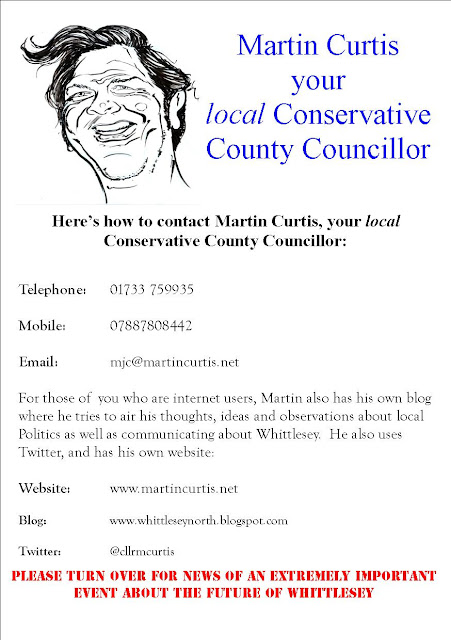 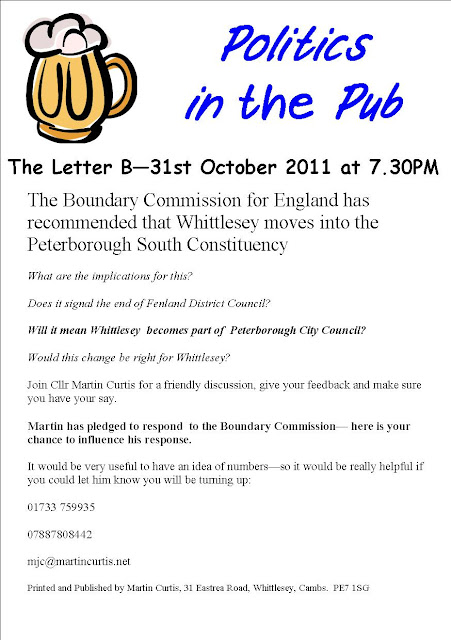 Posted by Martin Curtis at 14:46 No comments:

Since the decision to give planning permission for 460 houses on Bassenhally Farm with one of the accesses coming off Drybread Road (which I opposed), I have been working hard to try and get some thinking about how to improve the horrendous parking problem outside Alderman Jacobs School - which I believe will get worse with the new development.  This has involved lobbying and working with Fenland District Council and the County Council (don't tell me there is no benefit to being a dual-hatted Councillor).

This week I have at last heard that there is a recognition that I have a point and some work is going to be done to investigate ways to improve it.  One of the options being considered is extending the dropping off zone just outside the school.

I don't think this will solve the problem, but I hope it will deliver improvements, at the very least it should stop things getting worse.  There isn't any more to say at the moment, but rest assured I will try and update on progress when there is something to report.
Posted by Martin Curtis at 12:06 No comments:

We are having quite a spat in Cambridgeshire about Councillors' allowances.  Not helped by some issues with how the setting up of our independent panel was managed.

The rules (Nationally) state that our allowances have to be looked at every four years by an independent panel.  This is not to deal with inflation - that is normally linked to staff pay rises - and, like others, we have not had an inflationary rise for at least two years.  This change is to revisit the role of Councillors, to examine workloads and structures, marry it up against other circumstances and make recommendations.

The difficult bit is that Councillors have to then vote to agree the results of the panel, something I am deeply uncomfortable about.  My view is that this is flawed and creates the sort of controversy we are seeing at the moment, I believe the recommendations of these panels should be implemented automatically - councils should not be voting on their own allowances.  Because of this view, I have always said I would support the recommendations of any panel, whether it raised or lowered allowances, that is what I said during the debate and why I voted for an increase in allowances.  This is my speech:
What really disappointed me is that Cambridgeshire Lib Dems said virtually nothing during the debate leading up to that vote.  Their Leader spoke for about 40 seconds, but the rest said nothing.  I tweeted at the time that it smacked of cowardice and I stand by that.  When I put that feeling to a couple of Lib Dem Councillors after the meeting, they told me that they had an agreed group policy to say nothing.  They have now put out some sort of press release that says they "firmly opposed" a rise in allowances. That claim is utter balderdash.

Why does this matter?  Well, the vote last week was a free vote.  That meant that the party politics was taken out of the debate and therefore there was an argument to be won in the chamber, so those who opposed a rise had a responsibility to make their case.  Indeed Councillor Nichola Harrison, an independent Councillor, said that she had been persuaded to vote for the increase based on what was said in the chamber.  I suspect if a strong case had been made against the rise, some of those who supported it might have voted the other way.  Given that two people switching votes would have tied the result.  It is easily argued that the weak, cowardly and opportunistic approach taken by the Lib Dems during the debate contributed to the Yes vote winning,  So to now kick up a fuss and claim they "firmly opposed" is utter hypocrisy. Just to reinforce the point, the Lib Dem group leader at the time agreed to the panel being set up and, as of last night, Cambridgeshire Lib Dems website had absolutely no comment or press releases about the issue.

The debate and vote about allowances, including the decision to go along with an independent panel and raise allowances is not what damages politics, what really does harm are the sort of duplicitous games the Lib Dems are playing.  I want to make it plain, I am happy with the result - I believe accepting the outcome of the independent panel's deliberations (whether it recommends increases or otherwise) is the right thing to do.

Incidentally - the report of the independent panel can be found here

Thanks to Richard Taylor for the video.
Posted by Martin Curtis at 05:14 No comments:

However, it still disgusts me that the press rounded on Liam Fox and left Chris Huhne alone.

I also think this is yet another reminder that the way senior politicians use political advisors needs a rethink.  We need a move back to making better use of the voices of wisdom that exist within elected politics - i.e. using MPs with appropriate experience or time in office.

Political advisors distort politics and create a separation from the Government and the backbench MPs that are supposed to support them, less of them and better use of backbenchers would be a good thing.
Posted by Martin Curtis at 04:29 No comments:

Email ThisBlogThis!Share to TwitterShare to FacebookShare to Pinterest
Labels: Government

This morning I went to the launch of Living Sport's Sportmakers initiative in Cambridgeshire.  It was held at Milton Country Park, coinciding with the Cambridge Parkrun.

Sportmakers is an initiative aimed at getting more people involved in running sports events. The aim in Cambridgeshrie is to get 600 people to commit 10hours to organising an event of some sort - even if it is someone encouraging and getting some of their mates to run once a week.  The programme runs until September 2013, giving ample opportunity to capture the enthusiasm that the Olympics will generate.

Cambridge Parkrun is a perfect example of the sorts of project that Sportmakers will hope to create.  Started by Heidi and still largely run by her and a team of volunteers, it involves something like 250 runners each week running a 5km circuit around Milton Country Park.  As ever with any running event,  at least one of the active volunteers is also a member of Fetcheveryone, which is a phenomenal online running community. My parting comment to Heidi today was that she should be immensely proud of what she has achieved (in fact I think I actually said I would come back and run one day!!).
Posted by Martin Curtis at 04:11 No comments:

I had a busy day yesterday.  Great Eastern Run in the morning and Whittlesey Civic Service in the afternoon.  I ran one and hobbled to the other!!

The Great Eastern Run was, as ever, a great event.  Peterborough always does itself proud at this event with supporters cheering runners on right along the route.  Good support really does keep you going when you're struggling on these runs - so thanks to each and every one of you.
Posted by Martin Curtis at 00:22 No comments:

Email ThisBlogThis!Share to TwitterShare to FacebookShare to Pinterest
Labels: Running

I am not an apologist for Dr Liam Fox - I am not sure his behaviour is that you would expect of a Defence Secretary when you consider the security implications.

However, at the same time as he was exposed for having someone as an unpaid employee with access to the MoD, Chris Huhne MP has also, apparently, admitted trying to slur Theresa May privately to journalists The Guardian - surprise, surprise).  But, furthermore, it seems he may have lied about it.

In my view it is the sort of conduct that Chris Huhne has admitted guilt to that is destroying trust in politics - it feeds journalists in the Westminster bubble with bile and gossip that makes twant more, it contributes to our political system becoming distant and remote from the people it serves.  In my opinion, Chris Huhne has proven himself far less worthy of holding political office than Dr Liam Fox.  However, I cannot see there being a campaign against Chris Huhne - the press love the vile politicians that like to sneak and brief their way to the top - they are the ones that create their headlines, irrespective of morality.
Posted by Martin Curtis at 23:52 No comments: